This is a response to the Implementation Status and Results Report (ISR) for the NSUP-CERC/CSRRP issued by the World Bank on June 4, 2021.

I.
Report
Implementation progress has been slower than expected. Preparatory activities continue to be financed under the Contingent Emergency Response Component of the National Slum Upgrading Project (P154782), such as technical designs and environmental and social instruments for key project activities including permanent housing settlements, public schools and health facilities, and buildings at the Tadulako University. The government is using the Central Sulawesi Disaster Response Information System (Sistem Informasi Tanggap Bencana – SITABA, website: https://sitaba.pu.go.id/sitabapalu/) to disseminate information about the project and manage grievances.

Response
This is surprising because the World Bank just realized the implementation progress is slower after 1.5 years (18 months) of the NSUP-CERC/CSRRP permanent housing development project running!

The construction process of Phase 1A permanent housing in Duyu (230 units) and Pombewe (400 units), which was started in January 2020, was just completed in March 2021! Public facilities and social facilities are even still being worked on. Contractually, Phase 1A is supposed to be completed in 6 months, should be completed by early July 2020. There is an 8-month delay! If it is added with the availability of public facilities and social facilities, the delay becomes, this is the lowest count, 9 months! Thus, overall, it takes 16 months to build 630 units of permanent housing in Phase 1A (January 2020 to April 2021)!

Referring to this fact, the World Bank should have realized how slow the progress of NSUP-CERC/CSRRP implementation from a long time ago. At least, this issue should have been detected and reported in the previous ISR period (November 2020)!

Now, for Phase 1B. Phase 1B will build 1,005 units of permanent housing (which later increased to 1,076 units). Construction began in October 2020. As of May 2021 (within 7 months of work), the progress of the work has been 42%. That’s according to the report of the PUPR Housing Working Unit, as a party responsible for permanent housing development. In our monitoring, the progress of the work is only about 30%! 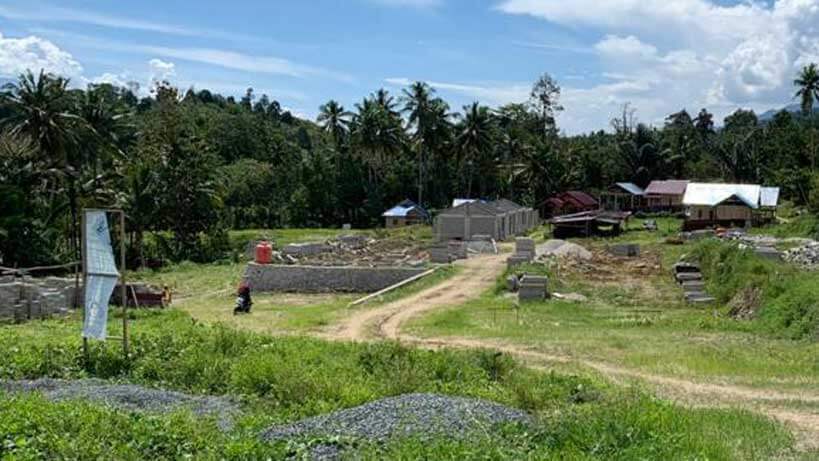 One of the construction sites for satellite permanent housing in Phase 1B is in Salua Village, Sigi Regency. In this 1.6 hectare land, 63 units of permanent housing will be built. From this photo taken on June 10, 2021, it can be seen that only a few permanent housing have been built. It doesn’t look like there are any workers working there either. (Photo: Ella/Monitoring Team)

But, alright. Let’s use the report from the PUPR Housing Working Unit. If in 7 months the progress realization just 42%, with a simple mathematical calculation, to get to 100% it will take more than 10 months of extra time! The PUPR Housing Working Unit stated that Phase 1B will be fully completed in December 2021 (which means 14 months of work if calculated from October 2020). By observing the current process, we are not quite sure by December 2021 Phase 1B will be completed. We guess that Phase 1B will also be delay again like Phase 1A. 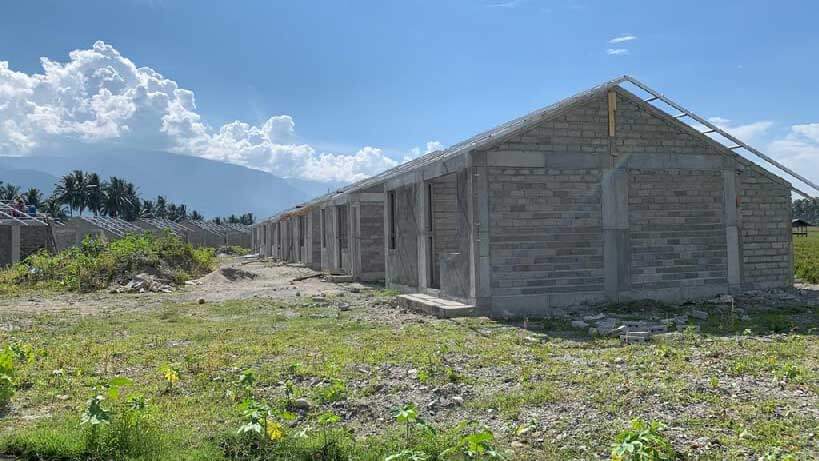 With the admittedly slow implementation progress, the World Bank has rated the Overall Implementation Progress for NSUP-CERC/CSRRP as Moderately Satisfactory!

In our opinion, the rating given by the World Bank can show their low expectations for this project. From our perspective, the rating of the overall implementation progress is far from satisfactory!

II.
Report
The government is using the Central Sulawesi Disaster Response Information System (Sistem Informasi Tanggap Bencana – SITABA, website: https://sitaba.pu.go.id/sitabapalu/) to disseminate information about the project and manage grievances. As of March 2021, 229 complaints were received for issues related to both the Contingent Emergency Response Component under the National Slum Upgrading Project (NSUP-CERC) and this project (CSRRP), with all complaints reportedly resolved.

Response
Yes, SITABA is used to disseminate information about the project and manage grievances. However, to what extent is the SITABA site informed to the public, so that the public, especially for DAPs/PAPs, knowing, accessing, and taking advantage of the existence of SITABA. Some of the data and documents provided on the site are no longer up-to-date! For complaints, we would like to ask, how many complaints have been reported through SITABA?

All reported complaints have been resolved?

If we read the reported complaints, most of them are related to the submission of aspirations and requests for information. This type of complaint is relatively easier to handle and resolve.

But, for complaints related to the cases, there are many that are not recorded in the Management of Informations and Problems (PIM). There are many DAPs/PAPs who do not report their cases because they do not have sufficient information, where to report or complain. Cases related to land disputes in Talise-Valangguni, for example. To date, these cases are still unresolved. Besides that cases, to our knowledge, there are still many unresolved reports or complaints.

Regarding the PIM, in our point of view, the Ministry of PUPR has only had a complaint channel, but has no handling mechanism. What is meant by a handling mechanism, for example, in what period of time the complaint, report, or case will be resolved; who is responsible, and how to handle it.

In addition, as we have recommended in our monitoring report, we have not heard yet that the Ministry of PUPR has a complaint and handling mechanism for cases related to gender-based violence (GBV), sexual exploitation and abuse (SEA), and violence against children (VAC). Again, we emphasize the importance of the feedback and grievance redress mechanism (FGRM) for those cases to be made separately and handled specifically. This is also inseparable from the commitment of the World Bank and the Ministry of PUPR as project implementers who must implement strategies and action plans for GBV and SEA.